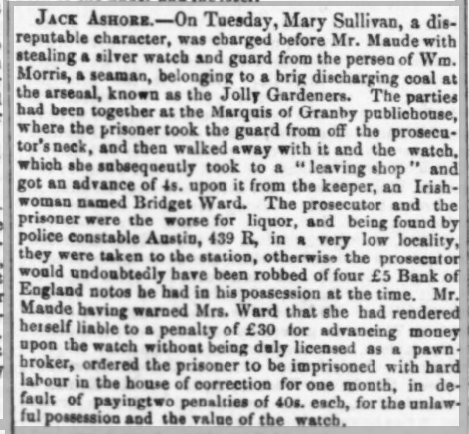 JACK ASHORE.—On Tuesday, Mary Sullivan, a disreputable character, was charged before Mr. Maude with stealing a silver watch and guard from the person of Wm. Morris, a seaman, belonging to a brig discharging coal at the arsenal, known as the Jolly Gardeners. The parties had been together at the Marquis of Granby public house, where the prisoner took the guard from off the prosecutor’s neck, and then walked away with it and the watch, which she subsequently took to a “leaving shop” and got an advance of 4s. upon it from the keeper, an Irish-woman named Bridget Ward. The prosecutor and the prisoner were the worse for liquor, and being found by police constable Austin, 439 R, in a very low locality, they were taken to the station, otherwise the prosecutor would undoubtedly have been robbed of four £5 Bank of England notes he had in his possession at the time. Mr. Maude having warned Mrs. Ward that she rendered herself liable to a penalty of £30 for advancing money upon the watch without being duly licensed as a pawn-broker, ordered the prisoner to be imprisoned with hard labour in the house of correction for one month, in default of paying two penalties of 40s. each, for the unlawful possession and the value of the watch.