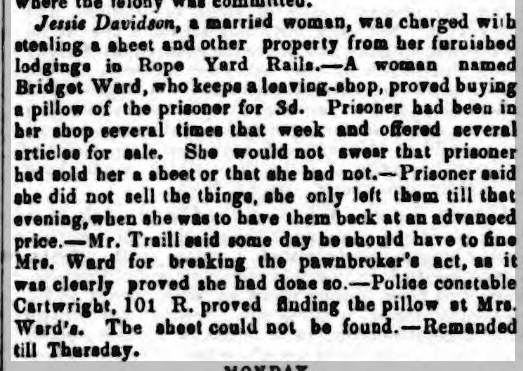 Jessie Davidson, a married woman, was charged with stealing a sheet and other property from her furnished lodgings in Rope Yard Rails.—A woman named Bridget Ward, who keeps a leaving-shop, proved being a pillow of the prisoner for 3d. Prisoner had been in her shop several times that week and offered several articles for sale. She would not swear that prisoner had sold her a sheet or that she had not.—Prisoner said she did not sell the things, she only left them till that evening, when she was to have them back at an advanced price.—Mr. Traill said some day he should have to fine Mrs. Ward for breaking the pawnbroker’s act, as it was clearly proved she had done so.—Police constable Cartwright, 101 R. proved finding the pillow at Mrs. Ward’s. The sheet could not be found.—Remanded till Thursday.