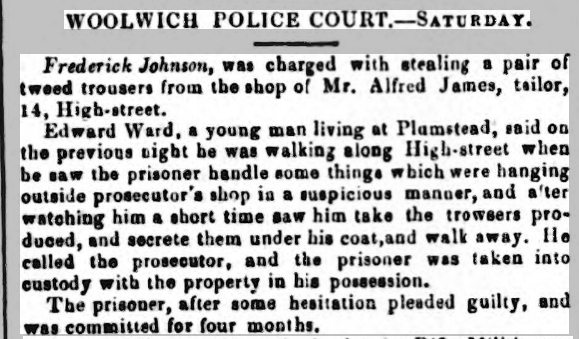 WOOLWICH POLICE COURT.—Saturday
Frederick Johnson, was charged with stealing pair of tweed trousers from the shop of Mr. Alfred James, tailor, 14, High-stree.
Edward Ward, a young man living at Plumstead, said on the previous night he was walking along High-street when he saw the prisoner handle some things which were hanging outside the prosecutor’s shop in a suspicious manner, and after watching him a short time saw him take the trousers produced, and secrete them under his coat, and walk away. He called the prosecutor, and the prisoner was taken into custody with the property in his possession.
The prisoner, after some hesitation pleaded guilty, and was committed for four months.