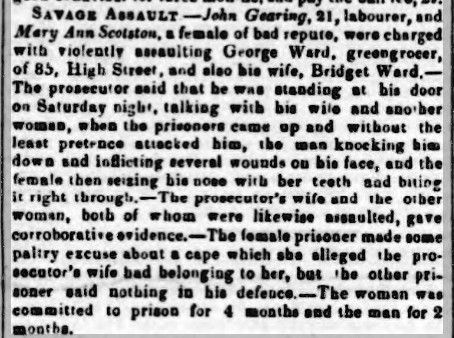 SAVAGE ASSAULT—John Gearing, 21, labourer, and Mary Ann Scotston, a female of bad repute, were charged with violently assaulting George Ward, greengrocer of 85, High Street, and also his wife, Bridget Ward.—
The prosecutor said that he was standing at his door on Saturday night, talking with his wife and another woman, when the prisoners came up and without the least pretence attacked him, the man knocking him down and inflicting several wounds on his face, and the female then seizing his nose with her teeth and biting it right through.—The prosecutor’s wife and the other woman, both of whom were likewise assaulted, gave corroborative evidence.—The female prisoner made some paltry excuse about a cape which she alleged the prosecutor’s wife had belonging to her, but the other prisoner said nothing in his defense.—The woman was committed to prison for 4 months and the man for 2 months.