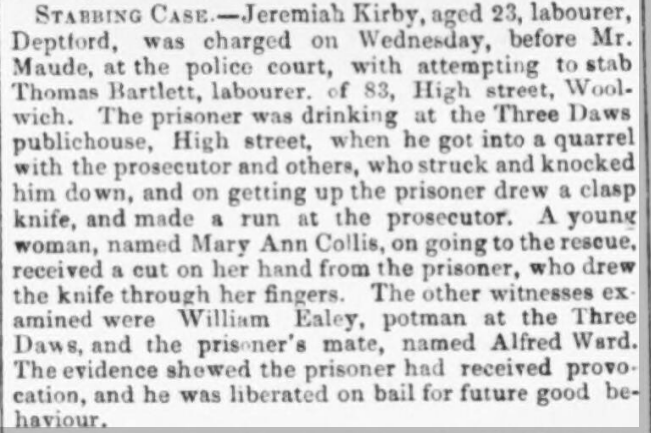 STABBING CASE.—Jeremiah Kirby, aged 23, labourer, Deptford, was charged on Wednesday before Mr. Maude, at the police court, with attempting to stab Thomas Bartlett, labourer of 83, High street, Woolwich. The prisoner was drinking at the Three Daws public house, High street, when he got into a quarrel with the prosecutor and others, who struck and knocked him down, and on getting up the prisoner drew a clasp knife, and made a run at the prosecutor. A young woman, named Mary Ann Collis, on going to the rescue, received a cut on her hand from the prisoner, who drew the knife threw her fingers. The other Witnesses examined were William Ealey, potman at the Three Daws, and the prisoner’s mate, named Alfred Ward. The evidence showed the prisoner had received provocation, and he was liberated on bail for future good behaviour.