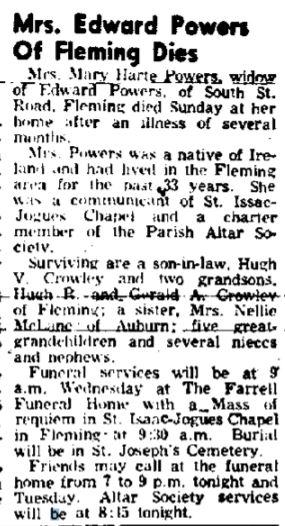 Mary Harte Powers, obituary, 27 Jun 1966, p. 3, col. 8. Mrs Mary Harte Powers, widow of Edward Powers, of South St. Road, Fleming died Sunday at her home after an illness of several months. Mrs. Powers was a native of Ireland and had lived in the Fleming area for the past 33 years. She was a communicant of St. Isaac-Jogues Chapel and a charter member of the Parish Altar Society. Surviving are a son-in-law, Hugh V. Crowley and two grandsons, Hugh R and Gerald A Crowley of Fleming; a sister, Mrs. Nellie McLane Auburn; grandchildren and several nieces and nephews. Funeral services will be at 9 a.m. Wednesday at The Farrell Funeral Home with a Mass of requiem in St. Isaac-Jogues Chapel in Fleming- at 9:30 a.m. Burial will be in St. Joseph’s Cemetery. Friends may call at the funeral home from 7 to 9 p.m. tonight and Tuesday. Altar Society services will be at 8:45 tonight.