Lopez Joseph Mumaugh was born in 1852 in Van Wert County, Ohio, into a prolific Mennonite family of German origin.1 His grandfather William Penn Mumaugh was the namesake of the Quaker William Penn, founder of Pennsylvania. In the 1700s, Penn visited persecuted religious minorities who had fled to the German Palatinates. He invited them to settle in Lancaster County, Pennsylvania. Lopez’s ancestors Lenhart and Juliana Mumma were among these settlers.

The Mumma family departed from Rotterdam on the ship Johnson. They arrived in Philadelphia on 19 Sep 1732.2 Lenhart and Juliana have thousands of living descendants today.3 This rich family history was lost on Lopez Mumaugh. Perpetual alcohol abuse and mental illness had addled his mind. He displayed only hatred and spite toward his family. 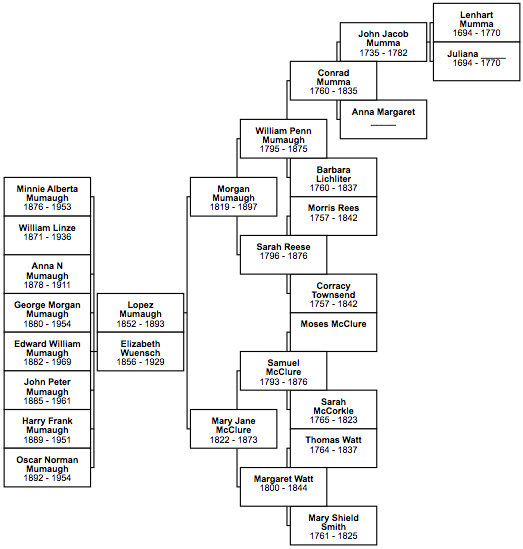 On 26 Oct 1875, Lopez Mumaugh married 19 year-old Elizabeth “Lizza” Wünsch in Indianapolis, Indiana.4 Her parents were immigrants from Württemberg. Over the next 18 years, Lizza bore seven of Lopez’s children and the brunt his abuse. Their oldest child, Minnie Alberta Mumaugh, was my great great-grandmother. She took the following tragic family story with her to the grave.

Several years into their marriage, Lopez Mumaugh had settled into a pattern of behavior. He would come home after drinking and beat his wife and anyone else who got in the way.5 His first recorded assault conviction was for kicking his wife Elizabeth off a chair while he was drunk.6 There were conflicting reports in local papers but he received a fine and placement in the workhouse.

The German newspaper Indiana Tribüne had an article mocking the irony of the situation.7 This translation could use improvement, but it says roughly:

Translation: Interesting is the case of Lopez J. Mumaugh, (which is how he wrote his name, even though he is a German) who was accused of having beaten his wife. The Mayor submitted a bill to the offender of $12.40. The wife who had received the beatings paid this amount with her own money, because in the workhouse where she had her husband, therein the beloved could not send. O no so cruel could they not no!

The workhouse did nothing to reform Lopez. Two years later, he came home drunk as usual and began abusing the family’s pets. His sister-in-law Joanna Wünsch interceded when he began throwing plates at the cat. He laid her on the table proceeded to beat her until Lizza chased him away with a broomstick. Later when describing the incident to the court, Elizabeth told them Lopez drank red “licker” for a living. The judge sentenced him to 30 days in jail to “sober up.” It, of course, did not work.8

In 1892, Elizabeth petitioned in court for a divorce from Lopez on the grounds of drunkenness and failure to provide.9 She laid out what appears in hindsight a clear case for termination of the marriage. He had been in jail for assault and being drunk in public multiple times. He addressed his family with profanity and “ill-sounding” names.10 He was a cigar maker by trade, but any money he made through this enterprise never reached his family before he exchanged it for liquor for his consumption. The court refused the divorce. If Lopez drank to intoxication again, however, the judge promised to grant the divorce.

The reliability Lopez lacked when it came to providing for his family, he made up for in the predictable regularity of his abusive drinking binges. The day after the court date, he came home in his usual state and attempted to choke his wife to death. If her sisters-in-law had not stopped him, he would have succeeded. The judge finally granted Elizabeth a divorce, but Lopez failed to show up for court. He fled to Chicago to evade arrest.11 From the Windy City, he wrote a letter attempting reconciliation, which the local newspaper printed after his death. It began with him expressing sorrow and asking forgiveness. He could not disguise his hatred and confusion, however. His writing quickly devolved into a loathsome account of self-pity and resentment.12

Chicago, Ill., March 6, 1893.
To mamma, my dearest and most loving friend on earth and my dear children, all of whom I love more than my life or anything under the sun. Mamma, I will ask your forgiveness in all things, as I have wronged you in every way that a man could wrong a wife. I have been untrue to you in virtue, in chastity and have been wrong in all respects to you. I have wrongfully accused you of unfaithfulness, when I knew that there was no grounds for my accusations…… And, dear mamma, don’t for God’s sake, marry as long as one of the children are under age. Since the 20th day of last September my life has been a blank. I have not seen a peaceful or a happy moment, and I never expect to see one on this earth, and the sooner I am off of the earth the better for you and the children and myself, as I know you live in fear of me. But God knows I would not harm a hair on your head. But I am of no use to myself or anyone else. My life is a dark and dreary passage, and I have prayed night and day for God to take me home. But it seems that I am to suffer as long as soul and body confines.… Except Maggie, Oscar’s wife; and if I should depart this life I will depart praying God’s curses on her and her offsprings as she willfully sore to a lie against me on the witness stand… If I should have wanted to have had improper relations with her I could have accomplished it… And for God’s sake Mamma don’t let her lead Minnie astray as she is a dangerous woman, as you will all find out in the future. Good-bye. May God bless you all. Your husband
L.J. MUMAUGHI wrote this as a true confession to clear my soul and trust to God for the future.

From Lopez’s point of view, Elizabeth was now denying him access to his family. In reality, she was denying him the regular opportunity to abuse and openly terrorize his family. This enraged him. Lopez often stalked the home after dark to harass his wife and children, frequently threatening to kill Elizabeth.13 While his earlier promises of sobriety and family devotion were hollow, this one was not.

Oscar Norman Mumaugh, the youngest child of Lopez and Elizabeth, turned one year old on 18 Jul 1892. Lopez arrived at the family home that evening to wish his son a happy birthday with liquor on his breath and a gun and knife on his person. When Elizabeth and her sisters refused to let him in, he demanded they bring Oscar to the door to kiss his father. They, of course, denied this request. When his sister-in-law Mary Wünsch told Lopez to go home and sober up, he fired his gun through the window, delivering to Elizabeth his last promise of murder.14

The bullet missed its intended target and instead struck Elizabeth’s sister Mary in the shoulder. Neighbors came rushing to aid the family at the sound of the gunshot. Lopez turned the gun to his temple and fired, shooting himself just above the eye and upwards through his brain. The shot did not kill him immediately. Lopez fell to the sidewalk where he slowly withered away in pain. Elizabeth refused to allow his body in the house. Bystanders closed in to watch his demise.15 Death took its time, as if repaying Lopez Mumaugh in kind for all of the agony and humiliation he had inflicted on his family over the years.

Lopez Mumaugh died at 10:40 pm that night. The coroner had a difficult time disposing of the body, as his wife Elizabeth would not claim it He told the oldest daughter Minnie that the surgeons wanted her father’s body, and it would be given to the medical college if not claimed. “He ought to be cut to pieces,” she said to the coroner, unfazed.16 Lopez Mumaugh’s victim Mary Wünsch succumbed to her injury on 8 Aug 1893, exactly three weeks later.17 She was 23 years old. Unfortunately, the family’s troubles did not end here. To attend Mary’s funeral, her father Frederick Wünsch checked himself out of the Dayton, Ohio Veteran’s home, where he stayed because of his disability, drunkenness and mental illness. The Wünsch/Mumaugh  family had more tragedy in store for them in the upcoming months and years. See: Frederick Wünsch: American Civil War veteran, a mind unseated by tragedy

I live in Virginia Beach and I was born in Indiana. My interests include engineering, politics, data science, history and genealogy.
View all posts by Erika Ward Lopresti →