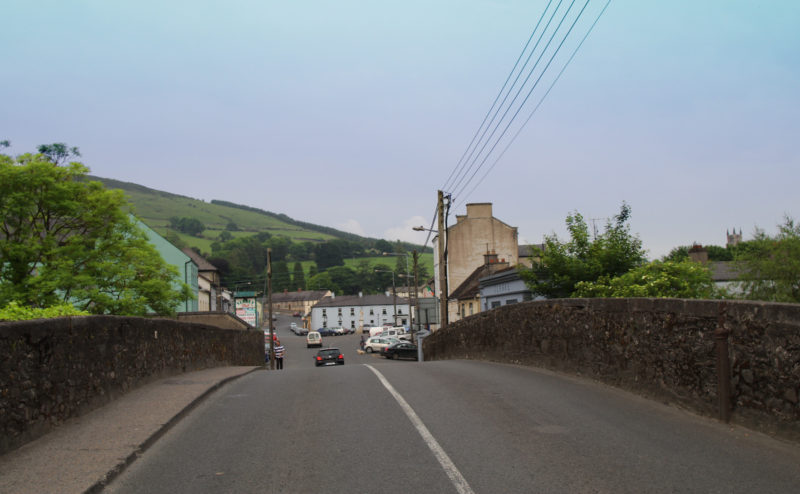 Economic inequality in Ireland during the 19th Century was firmly tied to a land rental system that involved, in decreasing order of wealth and agency: landlords, principal tenants, sub-tenants and landless labourers. The poorer tenants had the least land and paid the most per acre, leaving them vulnerable to fluctuations in crop yields and market prices.1 This unstable land system, combined with increasing population and dependence on the potato, set the stage for a massive crisis.2 A potato blight emerged in 1845 that caused back-to-back crop failures across the entire country.3 The ruling British government was reluctant to interfere and slow to respond when they did. An Gorta Mór, The Great Hunger, killed one million Irish people and forced another million to leave the country.4

Emigration from Ireland provided a release valve that partially eased the situation, with many fleeing to the United States of America or British North America (Canada).5 The more humanitarian landlords, like the Earl Fitzwilliam in County Wicklow, paid for the “unprofitable” people on their lands to leave the country, while others let their Irish tenants die on the side of the road.6 Our Styles and Kavanagh ancestors did not emigrate during the Great Hunger, but many related branches of those families did.

After the famine ended, the population was down and the economic situation eventually improved for many of those that remained. This was not without major reforms led by the Irish National Land League, an organization that sought to improve the situation of tenant farmers. The period of agitation caused by the Land League’s activism and the loyalists  who pushed back against the cause was called the Land War. Tactics used in the Land War involved violence, intimidation, and boycotts. The term ‘boycott’ itself comes from the actions taken against an English landlord named Charles Boycott during the Land War.7

The Land League was active in Baltinglass, and loyalist businesses and individuals were boycotted. Furthermore, those that did not boycott said loyalists were subject to unyielding harassment.8 One of the most outspoken figures in Baltinglass against the campaign was Rev. John Usher, the Rector of Baltinglass Church of Ireland. Mr. Usher had many vocal enemies in the town because of this.9

The Styles family was living in Baltinglass on Church Lane during the Land War of the 1870s and 1880s. They lived down the road from the Church of Ireland parish church.10 On the night of 26 Aug 1882, Mr. Usher was returning to his home on Mill Street when he crossed Baltinglass Bridge and ran into a group of men congregated on Webb’s corner. He got into an argument with one of the men named Martin Flinter, and attempted to drag him to the constabulary barracks on Mill Street. Another man named Henry Fennell tried to interfere, so Mr. Usher hit him with his umbrella. Martin Flinter escaped from Mr. Ushers grasp and ran the opposite way, down Edward Street and a lane adjacent to that road. Mr. Usher followed, shooting at him several times.11 During his pursuit, he passed my great-great grandmother Margaret Kavanagh Styles. Margaret was reportedly out going to see Mrs. Fogarty to ask her if her brother had returned home for the night. She was called to the Baltinglass Petty Sessions as a witness to the incident, which was reported in several newspapers.12, 13, 14

Margaret Styles, examined by Mr. McInerney, said she saw the Rev. Mr. Usher and Martin Flinter running on the night of the 26th of August. The Rev. Mr. Usher cried “stand” and then he fired and said, “Now, I have you.” There was another shot fired in the lane. There were three shots fired altogether.

Cross-examined by Dr. Toomey–Flinter was “fornenst” the lane when the first shot was fired, and Mr. Usher was within three or four yards of him. She went that way through the town to find out whether her brother had gone home. She asked Mrs. Fogarty if he had gone home, and she said she didn’t know.

Dr. Toomey–Was that how you found out he had gone home?

[Margaret Styles] That was the way. (Laughter.)

Perhaps Margaret’s involvement in the shooting was happenstance, but the boycotts related to the Land War are reflected in a story passed down through my own family. The account involved a harness-maker who was ordered to make some harnesses for British soldiers. He complied, but instead of supplying the finished product, he cut the harnesses into pieces before delivering them to the soldiers. Edward Styles, the husband of Margaret Kavanagh Styles, and father of my great-grandmother Margaret Styles, was a harness-maker, so the story is presumably about him.15 As with most family legends of this type, it is likely some of the details were exaggerated. However, the harness-maker part is true and, and he definitely would have been involved in the Land War-era boycotts in Baltinglass.

“The Attack on a Clergyman at Baltinglass.” The Dublin Daily Express, 2 Sep 1882. Online archives. The British Newspaper Archive, https://www.britishnewspaperarchive.co.uk : 2016.

I live in Virginia Beach and I was born in Indiana. My interests include engineering, politics, data science, history and genealogy.
View all posts by Erika Ward Lopresti →