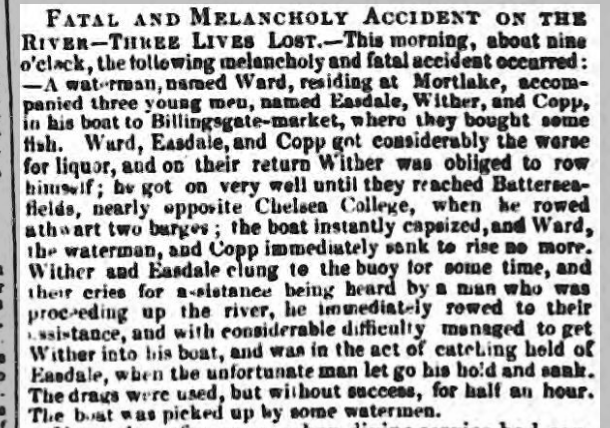 FATAL AND MELANCHOLY ACCIDENT ON THE RIVER—THREE LIVES LOST.—This morning, about nine o’clock, the following melancholy and fatal accident occurred:
—A waterman, named Ward, residing at Mortlake, accompanied three young men, named Easdale, Wither, and Copp, in his boat to Billingsgate-market, where they bought some fish. Ward, Easdale, and Copp got considerably the worse for liquor, and on their return Wither was obliged to row himself; he got on very well until they reached Battersea-fields, nearly opposite Chelsea College, when he rowed athwart two barges; the boat instantly capsized, and Ward, the waterman, and Copp immediately sank to rise no more. Wither and Easdale clung to the buoy for some time, and their cries for assistance being heard by a man who was proceeding up the river, he immediately rowed to their assistance, and with considerable difficulty managed to get Wither into his boat, and was in the act of catching hold of Easdale, when the unfortunate man let go of his hold and sank. The dregs were used, but without success, for half an hour. The boat was picked up by some watermen.